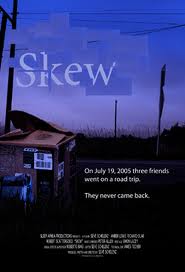 First time director Sevé Schlelenz was good enough to send me a screener copy of his found footage fright fest Skew. The trailer for the movie is really awesome (check it out!) so I was very happy to have the chance to see it for myself and review it. A mind bending 80 minutes of psychological horror and inexplicable events, Skew will certainly have you talking after its final moments. 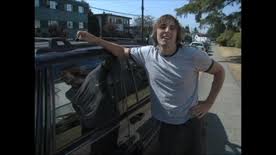 As quoted in the package sent to me, Skew is a movie five years in the making, a product imagined long before the likes of Paranormal Activity and the string of similar movies that released in its wake. Telling the story of close friends Rich, Eva and Simon, audiences are taken on a journey that starts off more light hearted (although with a layer of tension between two characters) and builds up to a climax of paranoia and fear. It seems our cameraman Simon wants to document the entire trip, which is on route to a friends wedding. He won't allow himself to be filmed but is only too happy to annoy his friends with his self made show. Eva, the only girl in the group, is adverse to this from the start and it is this coupled with a personal issue she has with Simon which begins the fragmentation on the group. Matters only serve to get worse when Simon begins to notice faces of people they encounter along the way are showing up horribly distorted. It's not long after this that those captured on film die in mysterious circumstances, causing Simons enthusiasm with his camera to spiral into an unhealthy obsession. So what is actually happening here and why does Simon very much appear to be a trigger for it? No matter what his friends do or do not believe its soon clear they are growing more and more unnerved by Simon and his camera.

I will admit this film got to me. I'm still thinking it over and over in my head and I don't see that as a negative thing at all. See, Skew is not a film that is happy to give you easy answers. I will admit with shamed face that I completely missed an all important point in the movies final scene. I think this is because I was trying too hard to see something and therefore didn't appreciate what was right in front of me. It wasn't until I looked elsewhere for answers that I realised what I was missing...my first reaction was 'holy shit!' and subsequently made me question everything I had just seen (and now still am!). I told Sevé that I need to re-watch Skew to pick up clues I may have missed and I have to say I can't wait to do so. Hopefully you won't be quite so silly as me not to notice the chilling truth reflected in the movies final scene, but I would bet that many viewers will benefit from going back on themselves to spot those all important puzzle pieces.

In terms of scares Skew excels in a few places. There is a scene in a field that truly unnerved me, followed by an all mighty jump scare. There is also a scene in a police station that literally made me swear in surprise. Probably what frightened me the most in this movie though was the ever escalating change in Simons character and possibly feeling as weary of him as his friends did!

The acting in the film was great. I was really impressed by Amber Lewis as Eva. She was very natural in her role as the fed up but ultimately kind girlfriend to Rich and friend to Simon and when her role required a bit more grit she really stepped up to the plate. I enjoyed Richard Olaks role as Rich. As best friend to Simon he did a great job of acting tied between his buddy and girlfriend and the scenes where he finally cracks were most impressive. Although he doesn't really appear on screen, as mentioned before the character of Simon disturbed me so a great job to Rob Scattergood for having such presence without actually showing his face!The writing is also top notch here as the dialogue between the three friends, particularly when tacking personal issues between the three is always believeable.

I guess my main criticism was the lack of solid answers related to the events of the movie. I don't always need everything spoon fed to me so it's actually not a bad thing that I am still processing the outcome of the movie, but I do feel some people may struggle with the ambiguity of the film. 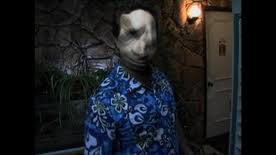 To surmise, skew is a taut, chilling and thought-provoking found footage horror film. I highly recommend watching this one and if you're lucky enough to be in the USA you can stream it right now on Netflix. Otherwise keep a look out for an official DVD release hopefully in the near future. Also keep your eyes peeled for an interview here soon with Skews writer/director Mr Sevé Schelenz!
Posted by Mark B at 03:19